Has BPM growth stalled with the service sector?

Over the last 20 years, the contribution of the service sector to the developed world's has been constantly growing, until around 2004. As these figures from EarthTrends, based on World Bank data shows, this growth in the contribution of services to the overall economy stopped growing around 2004 in both North America (76% of GDP) and Europe (71% of GDP). 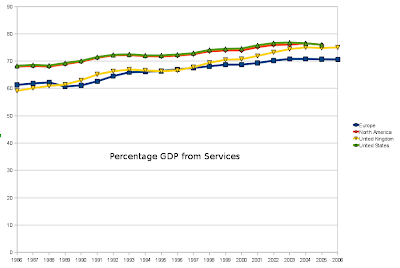 This growth in percentage of GDP from services has demanded that companies in the service sector start to work better. As the available talent pool has become more fully consumed, and therefore more expensive, companies have looked to outsource or offshore their relocatable operations, to try and reduce costs and enable further growth.
The use of automation and more streamlined processes, although used by companies for their critical processes (the ones they would not want to push offshore), has not really seen the increased adoption that would be expected. Office-based workers are still trapped with productivity tools such as Word, Excel and Outlook, which are really anti-productivity tools for many but those really needing to be creative of communicate in an ad-hoc manner. Business process management (BPM) has seen a growth, though I expect nothing like the explosion Forrester forecast in 2008: $1.6B in 2006, growing to $6.3B by 2011 (source: Workflow Blog).
Why is this? Companies have focused their efforts on complex, critical, expensive, and probably poorly performing processes first. Nothing like jumping in with both feet when trying to get some experience in a new world of technology. This has left some companies with expensive investments in software that actually is a poor fit for virtually everything else they do. And BPM vendors have grown the market by constantly adding new components into the definition of the BPM Suite (BPMS), so customers feel they have to buy more stuff to do really the same thing.
I still firmly believe that it is time for an easier way to implement business processes, critical or not. Every new process should only take days, not months, to implement and should not require 10's or 100's thousands of dollars of software to do it. Once companies have experienced the 'fast and easy' approach, outsourcing and offshoring will not seem so appealing, and neither will complex software development style BPM projects.

Let us help you improve your business today. Visit www.consected.com

Phil,
I agree. I am hoping that Adaptive Case Management (a WfMC term) will help lead the way here. It seems a lot more appropriate for achieving a quick win with many of the simple processes that make businesess run.
With respect to Office and email - at ActionBase we came to the conclusion that there is a reason people continue to use those tools for thier "everyday" processes. First of all - people use what they like, and like what they know. Changing habits is hard. Email and Ofice also provide the participants in the process the flexibility and personal control they need in an environment they feel comfortable with. No need for complex models to get started - the process emerges naturally from the activities of the participants.

Jacob, it seems that you have observed the same requirements for helping companies discover, design and deploy their business processes. Although I see the flexibility in the Adaptive Case Management work coming out of the WfMC, beyond small components of the process I don't see that what is proposed will enable a full end to end business process to be created quickly. But maybe I'm missing the point somewhere.

As for Outlook and Office, they will remain necessary evils, though it is amazing to me how many businesses with production processes manage to avoid any dependence on these items.